DURAND CUP TROPHY TOUR WAS FLAGGED OFF FROM FORT WILLIAM 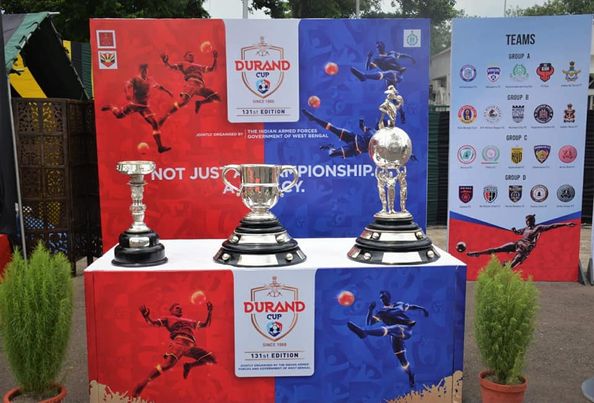 A four-city Trophy Tour to kickstart the preparation for the 131st Durand Cup Football tournament, was flagged off from Kolkata on Tuesday, July 19, 2022. The flagging off ceremony was held at the Indian Army Eastern Command Headquarters at Fort William in the presence of Shri. Aroop Biswas, Hon. Minister of Sports and Youth Affairs, Government of West Bengal, Lt Gen R P Kalita, UYSM, AVSM, SM, VSM, General Officer Commanding-in-Chief, Eastern Command and Lt Gen K K Repswal, SM, VSM, Chief of Staff, Eastern Command and Chairman Durand Organising Committee. The three Durand Trophies, The Durand Cup, (which is the original prize) the President’s Cup and the Shimla Trophy will first reach Guwahati in Assam on July 21st, then reach to the Manipur capital Imphal on July 24th, from there the trophies will reach Jaipur the capital of Rajasthan on 27th July and travel back to Kolkata and reach on 30th July where it will be received in front of the statue of the legendary footballer of yesteryears, Goshto Pal at Maidan Area Kolkata . The destinations for the Trophy Tour have been chosen keeping in mind that Guwahati and Imphal will be first-time hosts. The state of Rajasthan will be fielding a team in this prestigious tournament for the first time and hence Jaipur being the capital is the ideal choice .             Delivering an address on the occasion, the Hon. Minister for Sports & Youth Affairs, Government of West Bengal, Shri. Aroop Biswas said, “I commend the organizers for coming up with this brilliant idea of a Trophy Tour. This will help in spreading the popularity of the tournament further and help bring in new fans from new corners of the country. I wish the Durand Cup all the very best and on behalf of my sports loving Honourable Chief Minister Ms. Mamata Bannerjee and Government of West Bengal, we assure all support in making the 131st edition bigger and better than the previous year.” Also sharing his thoughts Lt. Gen. R. P. Kalita, UYSM, AVSM, SM, VSM, General Officer Commanding-in-Chief, Eastern Command, said, “It is indeed an honour to be a part of this historic occasion of the ‘Flagging Off’ of the first ever Trophy Tour of the iconic Durand Cup silverware.I would like to take this occasion to profusely thank all the three State Governments for providing us with enthusiastic and proactive support in the preparations for the Durand Cup and am confident that the same would continue throughout the running of it. it is also heartening to see the joy of Durand spreading further into the East with Assam and Manipur becoming first-time hosts.”    Giving further details of the tournament Lt Gen K K Repswal, SM, VSM, Chief of Staff, Eastern Command and Chairman Durand Organising Committee, said, “This Durand Cup edition will definitely be bigger and better, not only from the perspective of having more teams than the previous edition, but also because it is travelling to two more states and all of India’s top division clubs have confirmed participation.We wish all participating teams all the very best.”             There will be a total of 47 games with both Guwahati and Imphal hosting 10-games of group C and group D each, even as all the seven knockout games will be held in three West Bengal venues. The opening pool matches are slated to begin on August 16that Kolkata’s Vivekananda Yuba Bharati Krirangan (VYBK) stadium, August 17th at Guwahati’s Indira Gandhi Athletic stadium and August 18th at Imphal’s KhumanLampakh stadium.The Tournament will culminate with the Grand Finale scheduled on September 18, 2022, at VYBK.             A symbol of India’s football history and culture, the Durand Cup is Asia’s oldest and the world’s third oldest football tournament, held between 16 top Indian football clubs across divisions (This year to increase the reach 20 teams will be participating) in the event organized by the Indian Armed Forces. The Durand Cup has been the breeding ground for India’s best footballing talent, over the years. The inaugural edition happened in Shimla in 1888, when it started off as an Army Cup, open only to the British Indian Army troops in India, but soon opened up to civilian teams. Named after its founder, Sir Mortimer Durand, Foreign Secretary of British India from 1884 to 1894, the iconic tournament reached its 130th edition in 2021. Mohun Bagan and East Bengal have been the most successful teams, winning the tournament 16 times each. 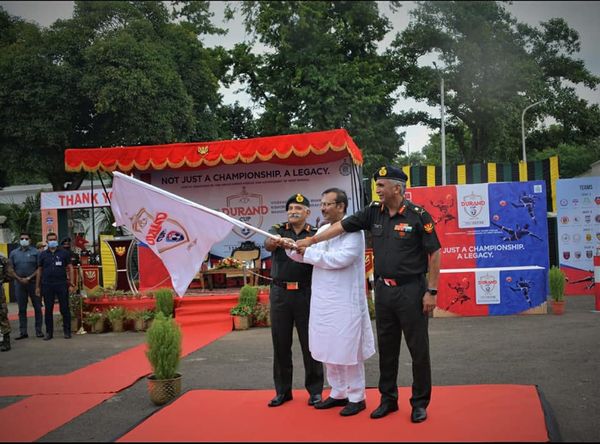 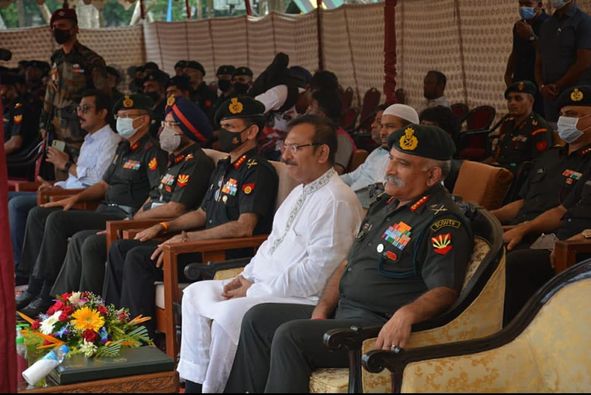