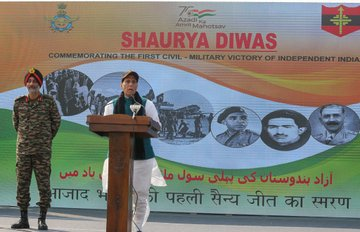 The Day is celebrated as part of celebrations for Azadi ka Amrit Mahotsav and 75th year of Air landed operations of Indian Army at Budgam Airport. The replication of the historic event was organised at Old Air Field on 27 October 2022 to pay obeisance to the brave soldiers and people of Jammu & Kashmir, who laid down their lives and also to honour the Next of Kin of war heroes who participated in the 1947-48 Indo-Pak War.

Hon’ble RM along with citizens of Kashmir witnessed re-enactment of history, covering the violation of ‘Standstill Agreement’ by Pakistan, wherein Pakistan Army infiltrated Jammu & Kashmir, brutalizing citizens by unleashing rape, murder, looting and arson. The event also covered depiction of arrival of Indian Army on 27 October 1947 to evict Pakistani Forces. A stunning airshow by the Indian Air Force was also on display, mesmerising the attendees. In addition, the Next of Kin of war veterans who travelled from across the country to be part of this mega event were also felicitated.

The Badgam landings are the first military operations of independent India, when Indian Army was inducted by Indian Air Force at Budgam Airport on 27 October 1947.  1st SIKH Regiment, under command of Lieutenant Colonel Dewan Ranjit Rai, who later laid down his life at Baramulla, changed the course of the war, wherein people and soldiers of State Forces of Jammu & Kashmir and the Indian Army fought valiantly alongside to evict Pakistani Forces, driving them out of most of Jammu & Kashmir till ceasefire on 05 January 1949. 27 October is celebrated as ‘Infantry Day’ by the Indian Army to commemorate the arrival of Indian Army at Badgam Airfield to protect Jammu & Kashmir after the ‘Instrument of Accession’ was signed on 26 October 1947 between Maharaja Hari Singh and the Republic of India 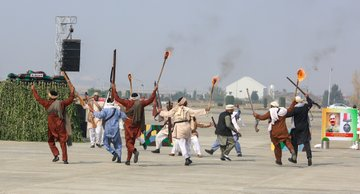