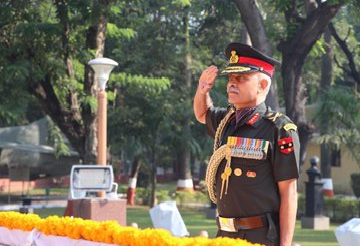 He was commissioned in June 1983 into the Dogra Regiment. During his distinguished military career, he commanded an Infantry Division responsible for dominating the Line of Control in North Kashmir and a strategically important Corps on the Western front. He tenanted varied prestigious staff appointments including the Military Secretary's Branch at Integrated Headquarters of Ministry of Defence (Army),a Military Observer at the United Nation Mission in Iraq and Kuwait and as Chief of Staff of two operationally active Commands ie; Headquarter Northern and Eastern Command.

Lieutenant General Nain took over the reins of the Southern Command as its General Officer Commanding in Chief on 01 Feb 2021. He was committed to ensuring the operational preparedness of the Southern Command through various Training Events, Exercise with Troops and Multi Agency Exercises. The Combined Commander’s Conference attended by the Hon’ble Prime Minister and Army Commander’s Standing Committee for Defence were some of the important events during his tenure. Recently concluded Defence Expo 2022 was also conducted flawlessly under his command.

During his tenure, COVID-19 relief operations were undertaken at multiple locations in the area of responsibility spanning 11 States and four UTs, as also massive flood relief and rescue operations were conducted in 27 districts spread over three states to bring succour to the flood-stricken populace. Relations with civil administration and Police of each state reached an all-time high during his tenure.

The push given by the Army Commander to adopt new and indigenous technology within the Command, led to the establishment of Regional Tech Node in Aug 2021. The General officer emphasised on administrative aspects like education and medical. Development initiatives involving schools and professional colleges got initiated manifesting in major improvements at Army Law College and Army Institute of Technology.  There was a renewed focus on increasing the health infrastructure, wherein state of the art Early Intervention Centre, Malignant Disease Treatment Centre and Palliative Care Treatment Centre were established to serve the medical needs of serving and veterans.

The Army Commander through his relentless efforts provided guidance in establishing the Veterans Node, which was inaugurated during his tenure.  His humane nature and touch was evident in the manner in which he continuously reached out to the veterans and their families during the trying times of COVID.

Mrs Anita Nain, as Regional President Southern Command Army Wives Welfare Association (AWWA) was adriving force in ensuring the well-being of families in Southern Command.  She focused on improvement and creation of infrastructure for skill development with a view to enhance employability of the spouses of soldiers. She was also at the forefront in providing succour and assistance to our Veer Naris, special children, soldiers with disabilities and families whose husbands are serving in far-flung borders. She also gave special attention to the school / college going children in providing them the best environment to nurture their nascent minds into promising citizens of India.

In his farewell address, the Army Commander complimented and expressed gratitude to all ranks of the formation and exhorted them to continue the good work in the finest traditions of the Indian Army. All Ranks of Pune Cantonment gave a befitting and dignified farewell to Lt General and Mrs JS Nain. 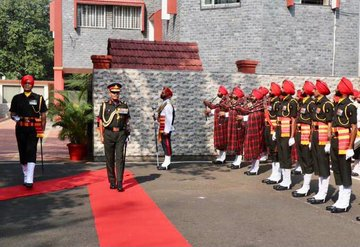