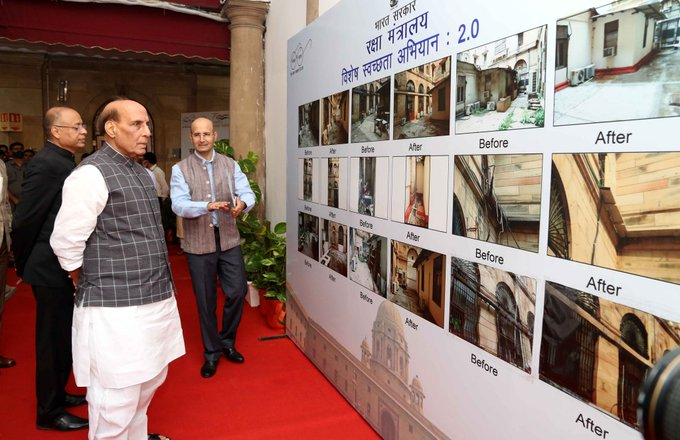 Raksha Mantri Shri Rajnath Singh inspected the South Block premises in New Delhi on 31st October 2022, as part of monitoring the progress of Special Campaign 2.0 on Swachhta being conducted by Ministry of Defence. He reiterated the need to institutionalize Swachhata as a habit by the officials of the Ministry and urged them to keep up their commendable efforts in keeping the premises neat and tidy.

Under Department of Defence, more than 5835 outstation locations/sites belonging to organizations such as BRO, CSD, CGDA, Sainik School, Cantonments etc. have been covered in the special campaign. 99% of all pending PMO references have been disposed of. More than 75% of all the pending state government references have been cleared.  23181 physical files have been reviewed out of which 10045 physical files have been weeded out in accordance with the Central Secretariat Manual on Office Procedure. Revenue of Rs 6.05 Lakhs has been generated from the disposal of scrap and 7475 square feet have been effectively freed in Department of Defence (Secretariat).

Military Hospitals under Directorate General of Armed Forces Medical Services have collaborated successfully with the local administration to have 3-R (Reduce Reuse, Recycle) kiosks installed in the premises. Self-Help Groups led by women are engaged in collecting the waste and putting them back in the recycling process from the point of segregation itself.

Cantonment Board, Shahjahanpur (Uttar Pradesh) has introduced onsite composting of household wet waste (bio-degradable). To enhance holistic participation of general public in this exercise, awareness programmes such as holding of Nukkad Natika, door-to-door propagation of message of cleanliness through Swachhata Doots, convening of drawing, debate and other competitions among school children etc. have been conducted successfully by various Cantonment Boards.

Ministry of Defence has been conducting the Special Campaign 2.0 on Swachhta across its offices located in New Delhi and in all field offices and local units, from 2nd October 2022 to 31st October 2022.   It started with a preparatory phase from 14th to 30th September, 2022 during which targets were identified for the campaign period. This year, special emphasis is on field/outstation offices. 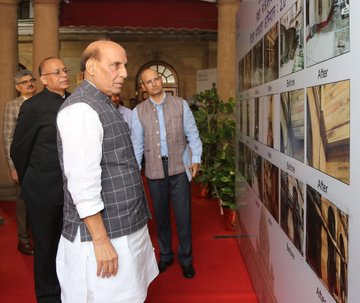