India isn’t weak anymore; We believe in peace but will give a befitting reply if provoked: Raksha Mantri Shri Rajnath Singh in Haryana 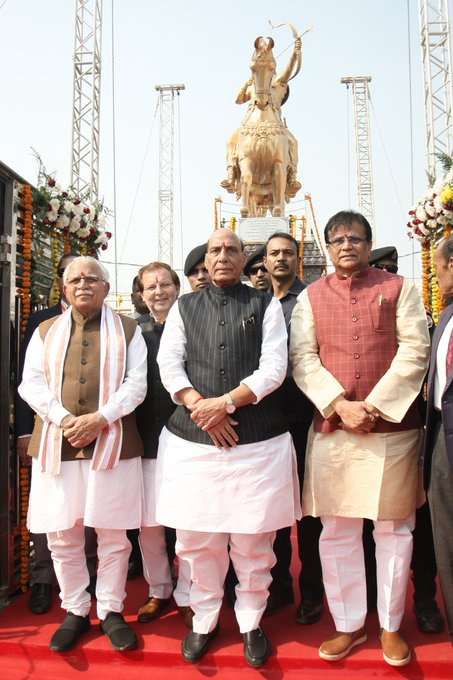 India isn’t weak anymore; We believe in peace but will give a befitting reply if provoked: Raksha Mantri Shri Rajnath Singh in Haryana

Raksha Mantri Shri Rajnath Singh has assured the Nation that the Armed Forces are fully equipped to give a befitting reply to anyone who casts an evil eye on India. Addressing an event in Jhajjar, Haryana on November 13, 2022, the Raksha Mantri asserted that safeguarding national interests is the main focus of the Government led by Prime Minister Shri Narendra Modi and the military is being armed with state-of-the-art and indigenously-developed weapons/equipment to protect the country from future challenges.

“India is no longer weak. We believe in peace, but if anyone tries to harm us, we will give a befitting reply. Our soldiers have proved this time and again. 2016 surgical strikes, 2019 Balakot airstrikes and the bravery shown by our soldiers during the Galwan Valley incident are proof of our prowess & preparedness,” said Shri Rajnath Singh.

The Raksha Mantri commended the Prime Minister for transforming India’s global image to an assertor from a mere listener, stating that the world now keenly listens to New Delhi. Highlighting that India is now among the top five economies of the world due to the Government’s efforts, he hoped that the country will find itself in the top three in the times to come.

Shri Rajnath Singh also stressed that the Government has taken inspiration from revolutionaries such as Netaji Subhas Chandra Bose, emperor Prithviraj Chauhan & Maratha warrior Chhatrapati Shivaji and is working to realise the aspirations of India while safeguarding its cultural heritage. He touched upon the ‘Panch Pran of Amrit Kaal’, the resolve of a ‘New India’, envisioned by the Prime Minister during his Independence Day address from the ramparts of the Red Fort this year.

The Raksha Mantri said, to get rid of the colonial mindset, the Government has taken a number of initiatives including renaming of Rajpath as Kartavya Path; installation of a grand statue of Netaji Subhas Chandra Bose at India Gate premises; a new Indian Navy ensign inspired from Maratha warrior Chhatrapati Shivaji and abolition of around 1,500 obsolete British-era laws.

Shri Rajnath Singh rejected the views of certain quarters on the presence of lotus flower in the logo of India’s G-20 presidency in 2023, which was launched by the Prime Minister recently. He said lotus is the national flower, connected with India’s cultural identity.

The event witnessed the unveiling of the statue of warrior king Prithviraj Chauhan by the Raksha Mantri in Jhajjar. He termed Prithviraj Chauhan as a great ruler who not only reigned over a large territory, but was also an epitome of bravery, justice and public welfare. Haryana Chief Minister Shri Manohar Lal was among the dignitaries present on the occasion.