Indian Navy Ship to be on Public Display at Krishnapatnam Port 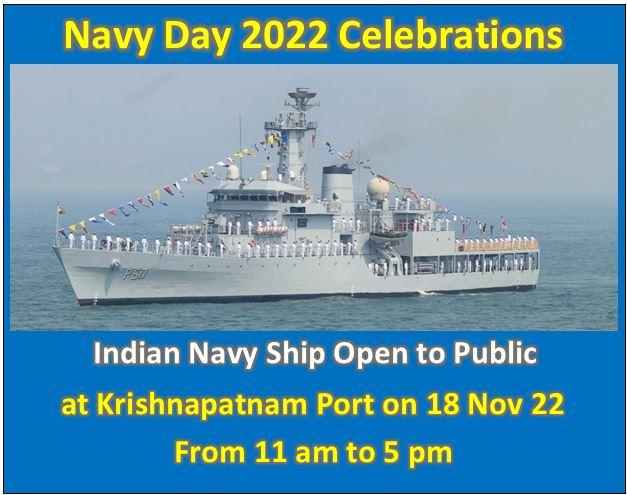 Indian Navy Ship to be on Public Display at Krishnapatnam Port

Indian Navy celebrates 04 December 2022 as Navy Day every year to commemorate the attack on Karachi harbour by the Indian Navy during the 1971 war. As part of the celebrations of Navy Day 2022.  As part of the Navy Day Celebrations, the Indian Naval Ship Sukanya would be visiting Krishnapatnam Port and would be open for visit for the general public, including school and college students, between 11 AM to 5 PM on 18 November 22.  Visitors are advised not to bring large ladies' purses and bags for security reasons.

Indian Naval Ship Sukanya is the first Offshore Patrol Vessel of the Sukanya class, and was commissioned on 31 Aug 1989. The ship is manned by a crew of 11 Officers and 140 sailors and is armed with Anti-aircraft, heavy, medium and light machine guns. The warship's speed, endurance and its ability to operate multiple types of helicopters make her a versatile platform capable of carrying out fleet support operations, coastal and offshore patrolling, ocean surveillance, monitoring of Sea Lines of Communication and offshore assets, and escort duties.