National security not a zero-sum game, but a collective enterprise crucial for global order beneficial to all: Raksha Mantri during 23rd International Conference of Chief Justices in Lucknow, UP 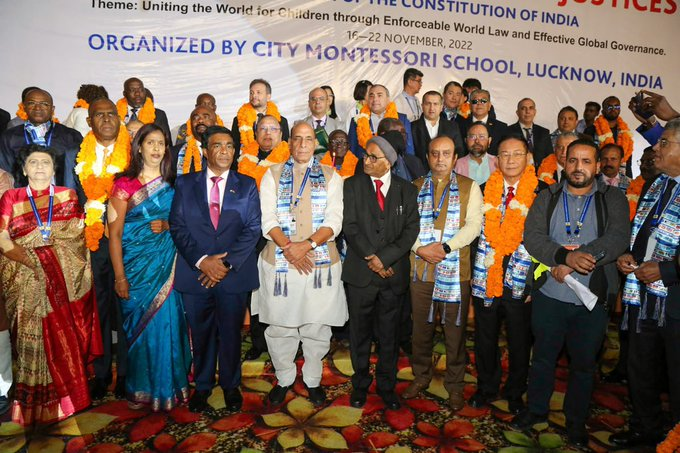 National security not a zero-sum game, but a collective enterprise crucial for global order beneficial to all: Raksha Mantri during 23rd International Conference of Chief Justices in Lucknow, UP

“India does not believe in a hierarchical world order; Multi-aligned policy will lead to shared responsibility & prosperity”

India’s partnership with any nation is based on sovereign equality & mutual economic development: Shri Rajnath Singh

National security should not be considered a zero-sum game, but a truly collective enterprise, which can create a global order beneficial to all. This was stated by Raksha Mantri Shri Rajnath Singh during his address at the 23rd International Conference of Chief Justices of the World in Lucknow, Uttar Pradesh on November 18, 2022. The Raksha Mantri elaborated on the broad thinking enshrined in Article 51 of the Indian Constitution which says, ‘The State shall endeavour to promote international peace and security, maintain just and honourable relation between nations, foster respect for international law and encourage settlement of international disputes by arbitration’.

Shri Rajnath Singh stated that India has adopted these high ideals in spirit and deeds throughout its journey after Independence and has always striven to treat the world as brotherhood and the global community as a family. He added that Article 51 of the Indian Constitution, which insists on the establishment of global peace, is not meant for India alone, but for the whole world.

“It is our moral responsibility to strive to build a world that is safe, secure and just for all times to come. In fact, in India, our leaders and visionaries have always dreamt of a world without borders, where mankind can breathe freely and solve problems together, which would otherwise be considered insurmountable. Many multilateral organisations, such as United Nations Security Council, have been working towards creating a global order. There is a need to elevate it to a level of shared interests and shared security for all,” said the Raksha Mantri, while presenting a road map for the future.

Shri Rajnath Singh stressed the need to create a win-win situation for all, which is guided by enlightened self-interest, sustainable and resilient to shocks, instead of a narrow self-interest, not beneficial in the long-run. “Strong and prosperous India will not be built at the cost of others; rather, we are here to help other nations realise their full potential,” he added.

The Raksha Mantri referred to the recent global response to the COVID-19 pandemic, stating that it highlighted the urgent requirement of multinational collaboration in information sharing, situation analysis, as also research, development and production of the vaccine. He termed it as an important lesson, which highlighted the need for greater understanding, connect and cooperative initiatives between institutions and organisations, within and across nations, in handling issues of national and international security. “The pandemic also gave a chance to us as a country, to put into practice our deeply held belief of ‘Vasudev Kutumbakam’, when we undertook landmark initiatives, such as Operation Samudra Setu and Vaccine Maitri. The impact of these initiatives has been very much visible in our bilateral relations with countries in the neighbourhood and beyond,” he said.

The Raksha Mantri reiterated that India believes in a multi-aligned policy which is realised through diverse engagements with multiple stakeholders, so that concerns of all are addressed for a prosperous future. He described it as the only way that can lead to shared responsibility and prosperity.

“India does not believe in a world order where few are considered superior to others. Our actions are guided by the very essence of human equality and dignity, which is a part of our ancient ethos and strong moral foundations and give us our political strength. Even our freedom struggle was based on the bedrock of high moral values. Therefore, realpolitik cannot be the fig leaf for being immoral or amoral. Rather, enlightened self-interest of nations can be promoted within the framework of strategic morality, which is predicated on the understanding and respect for the legitimate strategic imperative of all the civilised nations,” said Shri Rajnath Singh.

The Raksha Mantri highlighted that India’s partnership with any nation is based on sovereign equality and mutual respect, adding that “forging relations comes naturally to us, as we work towards mutual economic development.” He called for exploring ways and finding solutions to problems that transcend national boundaries and preparing a roadmap that can contribute towards building a more peaceful and sustainable world.