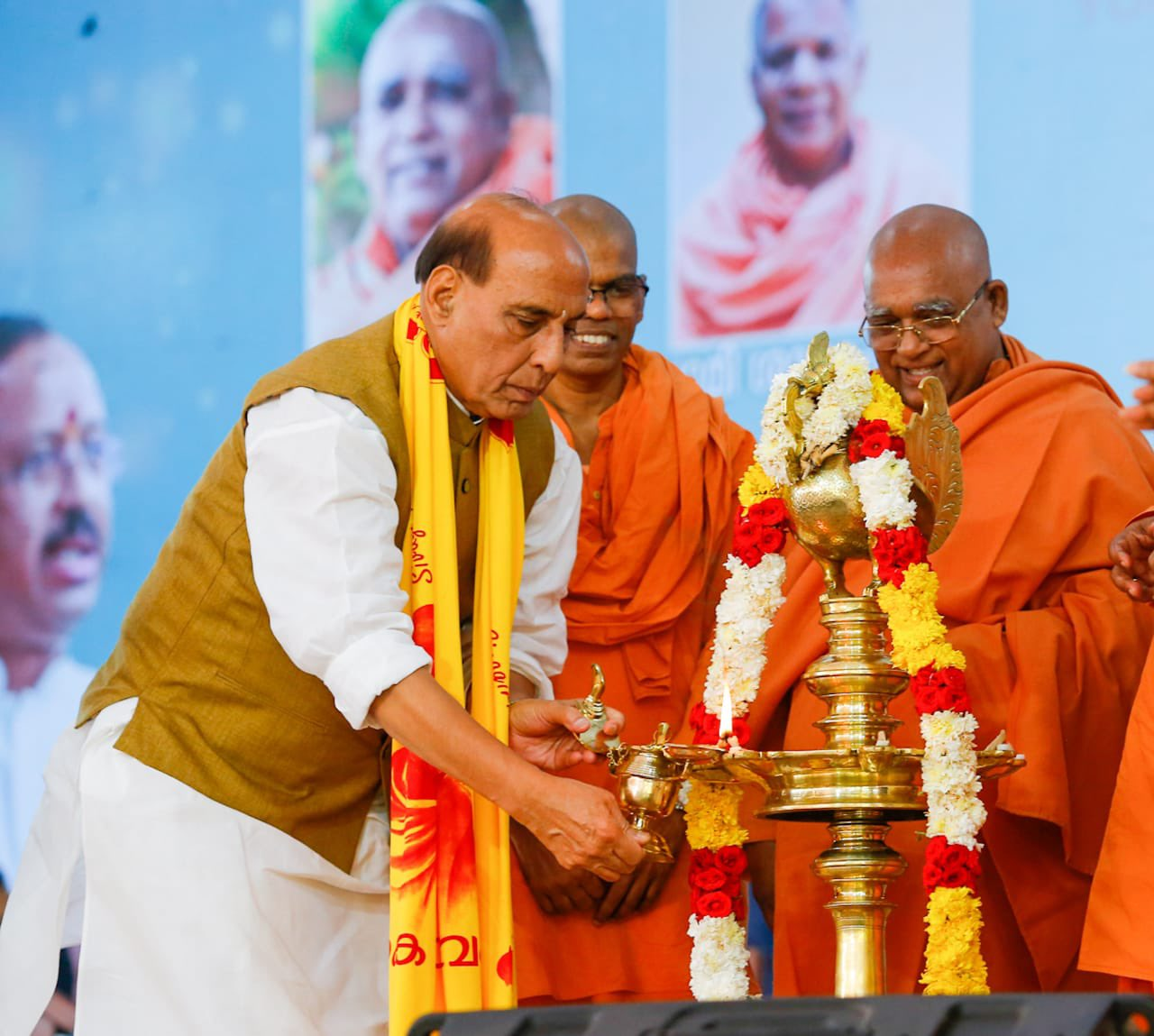 India has become one of the largest economies of the world because of hard work and enterprise of its people: RM

Raksha Mantri Shri Rajnath Singh said that the World today recognizes India as military power to be reckoned with, due to the Government’s pitching in for ‘Self-reliant India” which is based on ‘‘Prosperity through industry” preaching of Shri Narayan Guru of Sivgiri Mutt. He was addressing the congregation of saints and learned elders gathered at Sivagiri Mutt, Kerala to celebrate the Tirthdanam Mahotasav on 30th December, 2022. “His preaching of prosperity through industry is the basis of the Government of India's resolution of "Self-reliant India". Today India is one of the largest economies of the world because of its hard work and enterprise. Today India has become the top five economies of the world”,Said shri Rajnath  Singh and added that “It was the far-sightedness of Sree Narayana Guru that he ordered Sivagiri Math to spread consciousness among the common people on subjects like education, cleanliness etc. And with the grace of Guruji and the blessings of revered saints, our government has also focused its special attention on these subjects.”

Shri Rajnath Singh added that Self-reliance has been an intrinsic part of India's culture. Shri Narayan Guruji spread this message of self-reliance in the public through his teachings, and today Sivagiri Mutt is also working to take it forward continuously. Guruji was not only in favor of modernity, but also maintaining a balance between India's ancient culture and modernity, which is relevant even today. It has been corroborated by India becoming one of the largest economies of the world through hard work and enterprise, he said.

Paying his tribute to the sacred land of Kerala that has produced great saints, philosophers, and poets who not only ingrained high ideals and values in the heart of the common man, but also united the entire nation, the Raksha Mantri said that Acharya Shankara, born in a small village Kaladi, traveled all over India and culturally integrated the entire nation. It was unprecedented in itself. “The principle of oneness of the whole world as postulated by his philosophy of Advaitvaad, is still embedded in the soul of the country inspiring different sections of the society to remain united and equal. Sree Narayana Guru ji is undoubtedly one such name in the chain of enriching cultural unity”,  he said.

Discarding the criticism of Indian tradition, thinking and philosophy not being concerned with equality, liberty and fraternity, which is considered as Western concept, Shri Rajnath Singh said that the concept of human equality and fraternity has been prevalent in the ancient literature, tradition and thinking of India. Rather It is more comprehensive and inclusive than that of the western one. Whereas the West talks about equality, liberty and fraternity only among human beings, the Indian tradition, in the form of  'Vasudhaiva Kutumbakam' i.e. 'Whole world is one family' sees equality, fraternity and unity between human beings and animals, between animate and non-animate beings and in fact entire World and Universe . “And this is the reason why India was recognized as Vishwaguru in ancient times”, he said.

The Raksha Mantri further elaborated upon the equality and unity of world by quoting various texts and tenets of Ved, Upanishad, Gita and Ramayan. He apprised the gathering of the ‘Adaitvaad’ of Acharya Shankara which is a synonym for universal equality. He mentioned that Shri Narayan Guru gave the slogan of "freedom through education" during the freedom struggle. “It is also found in our ancient commentaries that knowledge liberates a man. Education leads to enlightenment, which leads to freedom.”

Sivagiri Mutt is a famous tourist pilgrimage place in Varkala town of Thiruvananthapuram district in Kerala. The Mutt also headquarters Sree Narayana Dharma Sangham, an organisation of Sree Narayan Guru’s disciples and followers. Sivagiri pilgrimage, known as Sivagiri Theerthadanam in Malayalam is another important festival celebrated in the Mutt. 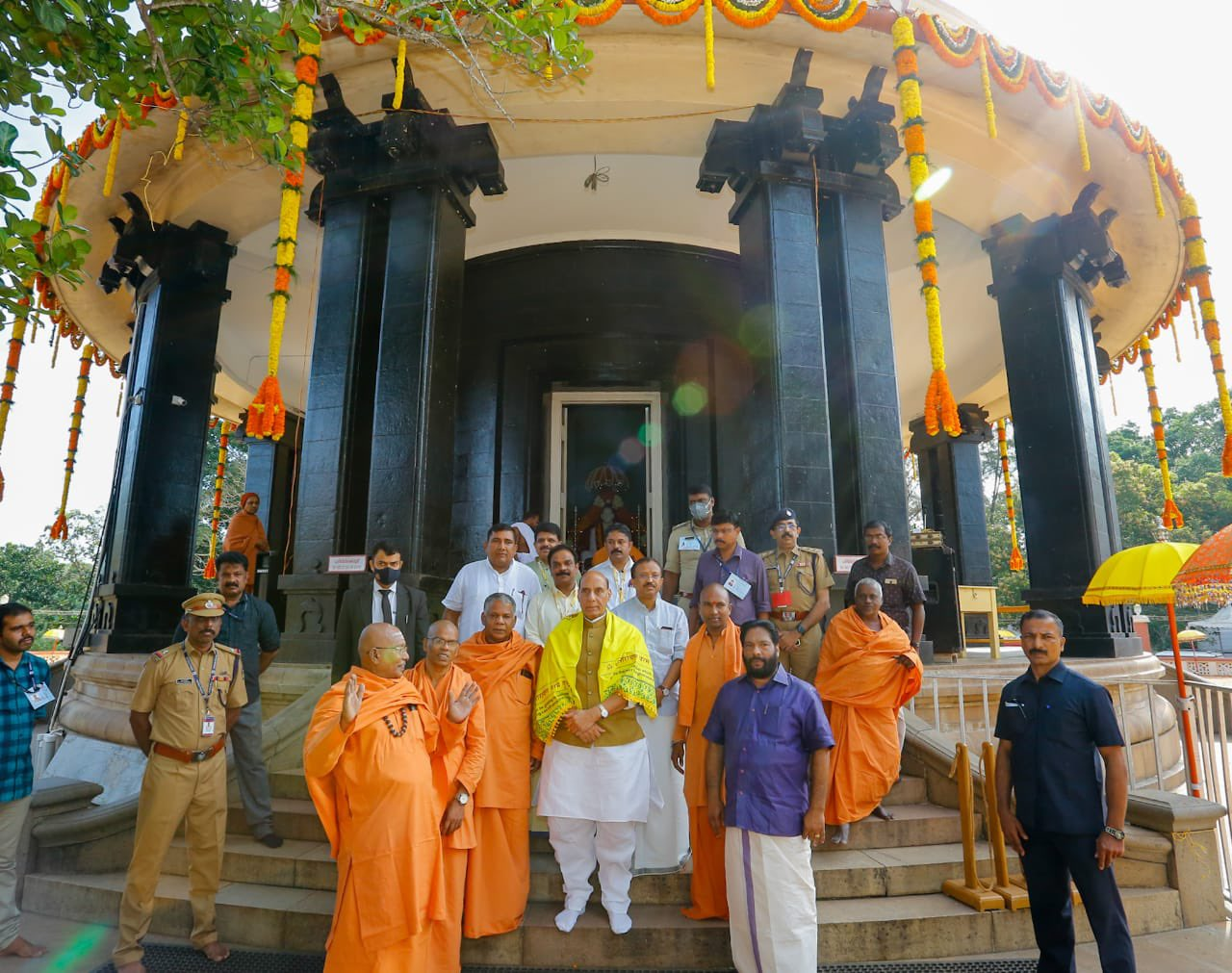