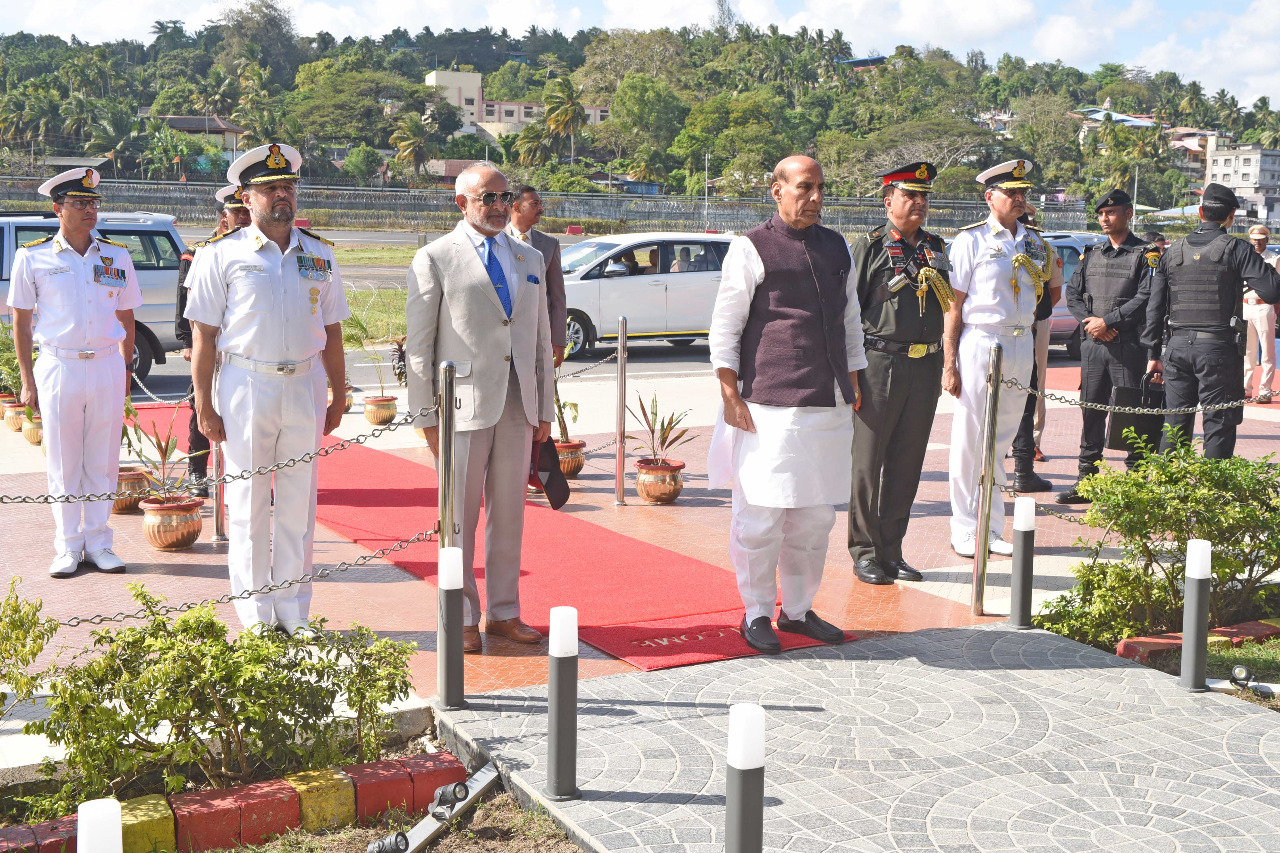 Raksha Mantri Shri Rajnath Singh reviewed the operational preparedness of Andaman & Nicobar Command and infrastructure development at operational areas during his visit to the Headquarters of the only operational joint services command of the country in Port Blair on January 05, 2023. Commander-in-Chief Andaman and Nicobar Command (CINCAN) Lieutenant General Ajai Singh briefed the Raksha Mantri about the geo-strategic potential of the Andaman and Nicobar Islands and the role they can play towards enhancing India’s influence and support to military operations in the area.

The CINCAN briefed the Raksha Mantri about the achievements, future plan and challenges of A&N Command. He highlighted the significant role played by A&N Command in carrying forward Government’s Act East Policy and in realising the Prime Minister Shri Narendra Modi’s vision of Security and Growth for All in the Region (SAGAR) by building ‘Bridges of Friendship’ with the country’s maritime neighbours. Shri Rajnath Singh also visited the ANC Joint Operations Centre (JOC) which is the nerve centre for integrated planning for surveillance, conduct of operations and logistic support.

Interacting with officers & jawans, the Raksha Mantri commended the Andaman and Nicobar Command for strengthening national security and keeping the maritime domain safe and secure, while playing a significant role in humanitarian assistance and disaster relief. He lauded their bravery and enthusiasm for being & ready 24X7 for the security of the islands and the Exclusive Economic Zone. He added that since its inception in 2001, the Andaman and Nicobar Command has significantly enhanced its operational capabilities, which reflects its indomitable spirit and commitment.

Shri Rajnath Singh exuded confidence that the courage & dedication of the Armed Forces will create a golden future for the country. He assured the soldiers that the way they are always ready for the security of the country, the government too is always ready for their welfare. He added that the Government is making all efforts to increase the efficiency and strength of the Armed Forces. “Under the guidance of our Prime Minister, we have taken a firm step forward towards self-reliance. We have made giant strides towards realising ‘Make in India, Make for the World’ vision. Our Armed Forces will soon be among the strongest militaries of the world. This is our vision as well as our mission,” he said. The Raksha Mantri also made special mention of the bravery and promptness with which the Armed Forces dealt with the recent situations in the northern sector.

Earlier, the Raksha Mantri reviewed a Quad-Service Guard of Honour and visited Sankalp Smarak, the location of Netaji’s historic arrival on December 29, 1943. At the Sankalp Smarak, he paid solemn homage to honour the sacrifices of soldiers of the Indian National Army. Upon his arrival in Port Blair, he was received by Lieutenant Governor of Andaman & Nicobar Islands Admiral DK Joshi (Retd), CINCAN and senior government officials.

This is the first visit of the Raksha Mantri to Indira Point since January 2019. Apart from the Strategic Signalling in view of proximity of these far-flung islands to the Indo-Pacific, the visit of Raksha Mantri to A&N Command motivated the troops deployed in these distant and remote islands. It is pertinent to mention that A&N Command is a 21-year-old successful Integrated Theatre Command which is now being planned at the national level.