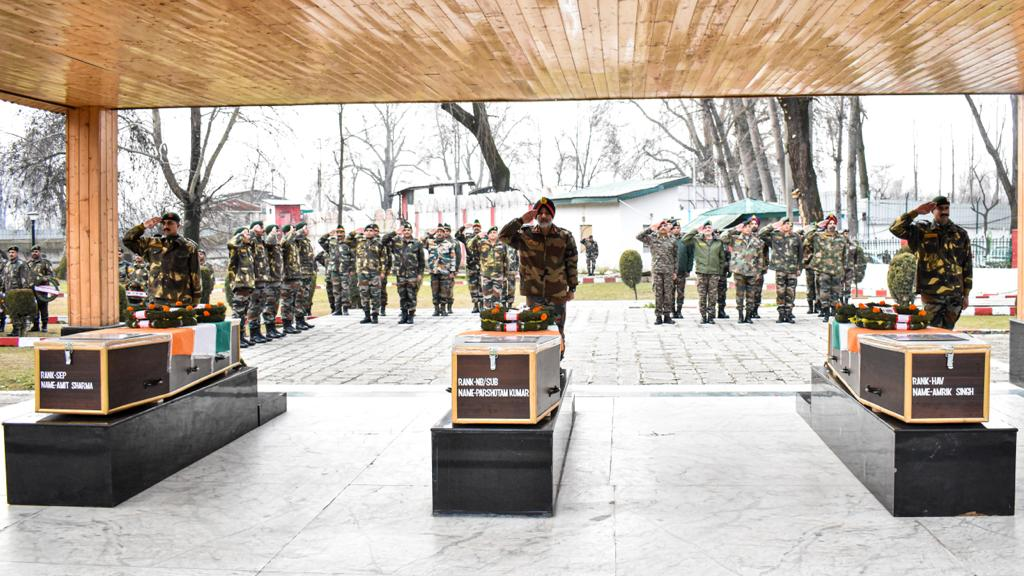 While moving towards the forward post, snow along the narrow track had broken, leading to slipping of the three bravehearts into a deep gorge. A search and rescue team had recovered the mortal remains of the three brave hearts in the morning of 11 Jan 2023. Owing to adverse weather conditions, the mortal remains could not be moved earlier and was airlifted, late afternoon on 14 January 2023.

Late Nb Sub Parshotam Kumar was forty-three years old and had joined Army in 1996. He belonged to Village Majua Uttami, Post Raika, Tehsil, Bishnah, District Jammu in J&K. The braveheart is survived by his wife and two children.

Late Hav Amrik Singh was thirty-nine years old and had joined Army in 2001. He belonged to Village Mandwara, Post Marwari, Tehsil Ghanari, District Una in Himachal Pradesh. The braveheart is survived by his wife and one son.

Late Amit Sharma was twenty-three years old and had joined Army in 2019. He belonged to Village Talasi Khurd, Post Kirwin, Tehsil Hamirpur, District Hamirpur in Himachal Pradesh. The braveheart is survived by his mother.

The mortal remains of Late Nb Sub Parshotam Kumar, Late Hav Amrik Singh, Late Amit Sharma will be taken for last rites to their native places, where they would be laid to rest with full military honours. In this hour of grief, the Army stands in solidarity with the bereaved families and remains committed to their dignity and wellbeing.